Santa was departing early today from Ireland with one of the most special sleigh-loads this Christmas, bound for the tiny African nation of Rwanda.

Some 30, in-calf Irish heifers began their 7,000km journey from Roscrea to Rwanda where they will arrive, following one week in quarantine, with their new owners next week, changing their lives forever.

The calves are the final movement by road, sea and air of prime Friesian Irish heifers to Rwanda this year by aid agency Bóthar in a special programme to mark the 25th anniversary of the horrific genocide.  The 1994 genocide claimed the lives of 1million people in a nation the size of Munster.

The agency has this year sent over 100 cows to families across Rwanda through the generosity of Irish farmers and the general public, who made cash donations that cover the purchase of animals and transportation, veterinary and animal husbandry training costs for the recipient families.

The gift has a multiplier effect as the heifers will give birth in the early spring, with females born being passed on to another family.  Bóthar goes back every year to put each heifer back in calf, with every family required to pass on the first-born female to any cow.

The aid agency has been operating in Rwanda for 21 years, with the ‘Bóthar herd’ now spread across the nation and changing the lives of thousands of families. The Irish cow delivers six times the milk yield of the tlocal variety – a prized possession of any family, so much so that he cow is considered the best gift that can be given to a Rwandan family.

The Bóthar projects support the Rwandan government’s ‘one-cow-per-family’ programme operated that seeks to ensure every rural family has at least one cow in a nation. Such is the relationship now between the Irish aid agency and the Rwandan government that last year Bóthar was engaged to purchase five pedigree bulls in Ireland and airlift them out to enhance the national breeding programme in the central African nation. 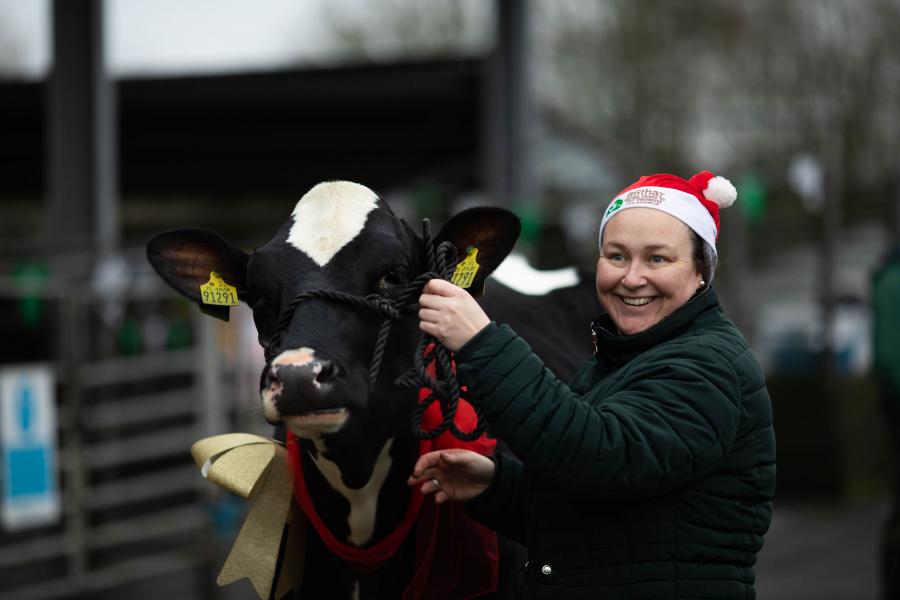 In attendance at Roscrea mart – the collection point for the heifers before their departure for Rwanda – were farmers who donated some of the cow as well as schoolchildren whose schools fund-raised to purchase some of the cows that were kept on local farms for the last six months.

Colm Doyle, of the Moate Bóthar Group, which donated almost half of the cows dispatched today said that it’s difficult to believe the impact until you see it.

“I've been to Rwanda and I've seen the impact the cows have on the ground.  There was one family we met at one stage who hadn't received a cow yet and this little boy came out of the house who was seven years old and he looked like he was three because of lack of nutrition. Down the road later that day I met the family that had received a heifer several years beforehand. The children there looked perfect.  That’s why we do this.

“Maybe at the time it mightn't register as much, but down the line, it's something that keeps coming back to you.  In Ireland here in the last few years, there's been a lot of expansion in dairying and plenty of farmers have one and two and three hundred cows.  But in the developing world, it's different. One animal will make all the difference.”

Said Niamh Mulqueen, Chief Operations Officer with Bóthar, “Today is an extremely happy day as we are sending what will be the most important gift that these Rwandan families will get. A lot of people are involved in this, from the farmers who donate or raise the animals and at a very difficult time for so many of them so that’s something we don’t take for granted.

“There’s the members of the public who donate money to make it possible as well and, indeed, the children whose schools also fundraise and buy cows, goats and other animals.”

She continued: “We've concentrated a lot of our work this year on Rwanda because it's the 25th anniversary of the genocide.  What people out there endured is beyond what most people could ever imagine and while it’s a country very much on the way up, there’s a long way to go. Still today, 25 years on, there are families living in unimaginable poverty.

“These cows will specifically be going to genocide widows and will change their lives completely. They will be able to start to earn an income, provide for their family, many will build new homes within a couple of years of getting the cows and it will give them dignity and hope for the future going forward.”